Why Concept Art Is Useful In Any Video Game

Concept art is used in games as a possible rough sketch for a model and /or a environment. They can be used to generate ideas or to create a certain mood in a area or object. Concept art is a idea you have in mind for video game (it's often written about or drawn roughly) and will be useful for when you develop your final product because you have an idea on what you're aiming for. Many artists will get inspiration on a creating concept art by reading the plot to gain a rough idea on what the mood of the environment and/or character should be like.


The picture above shows the first stage of creating concept art (which is creating a rough drawing). The picture above is concept art for a elf race in the Warcraft games. The next step is usually passing it off to a illustrator to create a more detailed image in preparation to create a 3D model. This piece of concept art is quite early in creation but the general feelings i get from this is the feeling of them very in touch with nature and perhaps there home is in a woodland setting. The image above makes me feel slightly intimidated because the faces of the elves are so unusual and to me they almost look fierce.
.
This step is very important for creating character models because it will give the people who designs them a much better idea on what and where details need to be added. As you can tell from the two images above  there have been many changes. Foremost amongst them is the change in facial features. The male does not have a set of antlers and both do not have leaves in there hair. There clothing and weapons do make them look primal which suits them well because in the game they mainly live in wooded areas. The uses of the colour green in the background amplify's this feeling additionally the male elf's long beard and there clothing adds to this.The main colours here seem to be brown, purple and green and to me these colours completely add to the feeling of them being primal and/or deeply connected to nature. 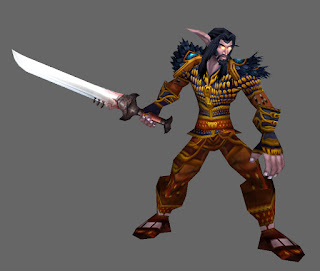 The picture above shows what the models look in game. I think the main differences in from the concept art and the models is that the male looks less muscular and much less primal. Since the game has many sets of weaponry and clothing which would allow you to modify what you look like.

The Feelings Generated By These Images
The main feelings generated by the first image was the feeling of them having a strong relation to nature, I feel this way because of the of the antlers on the males head and the leaves in the females hair. This feeling is amplified by the second image because of the color of the clothes mostly because I associate the color brown with trees and dirt.